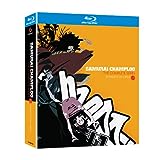 Description
For the first time ever, the buck wild samurais of the Champloo crew are carving up the competition on Blu-ray…catch the action now before the game passes you by. Let’s break it down. Mugen’s a reckless sword-slinger with a style that’s more b-boy than Shaolin. He’s got a nasty streak that makes people want to stick a knife in his throat. Then there’s Jin, a deadbeat ronin who speaks softly but carries a big blade. He runs game old-school style, but he can make … More >>

Biblical Essentials for the Family