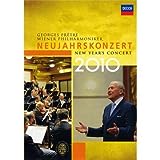 Description
The annual New Year’s Concert from Vienna, seen by millions on TV worldwide, is the best-known classical concert in the world. Featured Composers: J Strauss II, J Strauss I, Offenbach, Nicolai, and more! Georges Prêtre returns to Vienna’s illustrious Musikverein to conduct a compelling program that combines adored classics with no less than four intriguing premieres. Idolized in Vienna, the legendary French maestro, Georges Prêtre is a leading expert on and interpreter of… More >>