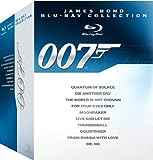 Description
This exclusive Bond giftset contains 10 of 007’s finest missions, including his latest, Quantum of Solace!
Dr. No From Russia with Love Goldfinger Thunderball Live and Let Die Moonraker For Your Eyes Only The World is Enough Die Another Day Quantum of Solace … More >>