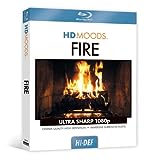 Product Description
Imagine fireside scenes so lifelike and captivating, you can feel the heat on your face and smell the familiar smoky scent of the hearth. HD Moods Fire is a spectacular display of cinema-quality high definition for your HDTV. It features five soothing scenes to choose from, including a crackling wood-burning fire, a peaceful modern gas fireplace and a beach bonfire so realistic you ll wish you had s mores! Seasonal fires include a gothic-style fireplace with a spook… More >>