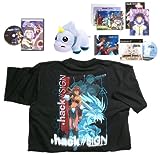 Amazon.com
Based on a popular PlayStation2 game, the fantasy-adventure .hack//Sign is set in the world within an online game. Tsukasa, a powerful Wave Master, finds himself lost in the cyberworld, with little memory of how he got there. More significantly, he’s unable to log out of the game and is apparently immune to many of its restrictions. He may be the focus of an impending crisis linked to the mysterious Key of the Twilight. As he wanders through different realms, Tsukasa m… More >>