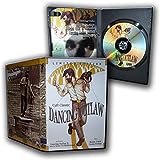 Description
A revealing portrait of the nearly extinct “hillbilly” culture, focuses on mountain dancer Jesco White’s uphill battle against abject poverty, drug abuse, petty crime and mental instability. In his struggle to live up to his father’s legacy as the finest mountain dancer in Appalachia, he leans on Jesus, Elvis Presley, and his wife, Norma Jean…. More >>

Measure Twice, Cut Once: Essential Building Basics for Kids of All Ages