Bring on the Night 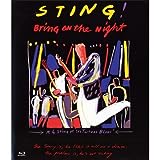 Amazon.com
It’s been available on audio CD since 1985 (now in a newly-remastered edition), but the long-awaited release of the DVD version of Bring on the Night will be a cause for celebration for fans of both Sting and the Police. Directed by Michael Apted (Coal Miner’s Daughter, Gorky Park, Enough), the film observes Sting and his new band as they rehearse and then perform their first concert, in Paris. The musicians, including Branford Marsalis (sax), Kenny Kirkland (keyboards), Dar… More >>

Bring on the Night