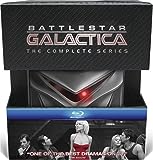 Description
Now you can relive every action-packed moment of the epic story that Entertainment Weekly proclaims “Riveting”! Rejoin the fight to save the human race as a small but determined fleet quests for the fabled planet Earth while being hunted by their nemesis, the robot cylons. Presented uninterrupted, experience the phenomenon from beginning to end!… More >>