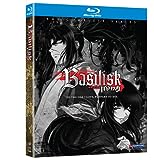 Description
Feudal Japan is set to bear witness to the bloody clash of titans as two fearsome ninja tribes are unleashed, one upon the other. For wretched within the Edo Castle loyalties have been severed into warring factions, as two sons struggle to inherit the title of Shogun. If this rupture goes unresolved, the Tokugawa kingdom will be torn apart. A solution must be found, one befitting a samurai family.The Kouga and the Iga, two ninja clans with four hundred years of hostilities … More >>

It's Not the Market, It's Your Marketing: 10 Essential Strategies to Sell Your Real Estate Now