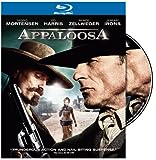 Description
Paired as rivals in A History of Violence, Ed Harris (who also directs, produces and co-scripts) and Viggo Mortensen stand together as friends and for-hire peacekeepers Cole and Hitch in a character-driven, bullet-hard Western based on Robert B. Parkers novel. As the woman who arrives in town with only a dollar and a keen sense of survival, Renée Zellweger adds feelings–things that can get you killed–to a quest to bring murderer Randall Bragg (Jeremy Irons) to justice. B… More >>

Gangland: The Complete Season One